Navigate back to the homepage

If you just need a refresher or really need to know how to do this fast, here it is for secrets.

Why RBAC for Key Vault Instead of Access Policies?

Traditionally controls in Azure Key Vaults were applied using access policies. The problem with these was that the permissions we granted applied to all objects of that type within a given Key Vault.

For example, if we granted an identity List and Get permissions on secrets in a given Key Vault, that identity could list all of the secrets in that Key Vault and read the value of all those secrets. There was no way to limit the scope of an identity to read only some, not all, secrets. The same applies to keys and certificates.

RBAC for Key Vault gives us the benefit of these more fine-grained controls along with a few added benefits such as support for Privileged Identity Management (PIM) and custom roles. It also brings Key Vault access control in line with the RBAC implementation in place across Azure more broadly.

ℹ️  Tip
An Azure subscription supports 4,000 role assignments, whereas access policies support up to 1,024 policies per Key Vault. Something to keep in mind when using RBAC for Key Vault at a large scale.

How to Set up RBAC for Key Vault 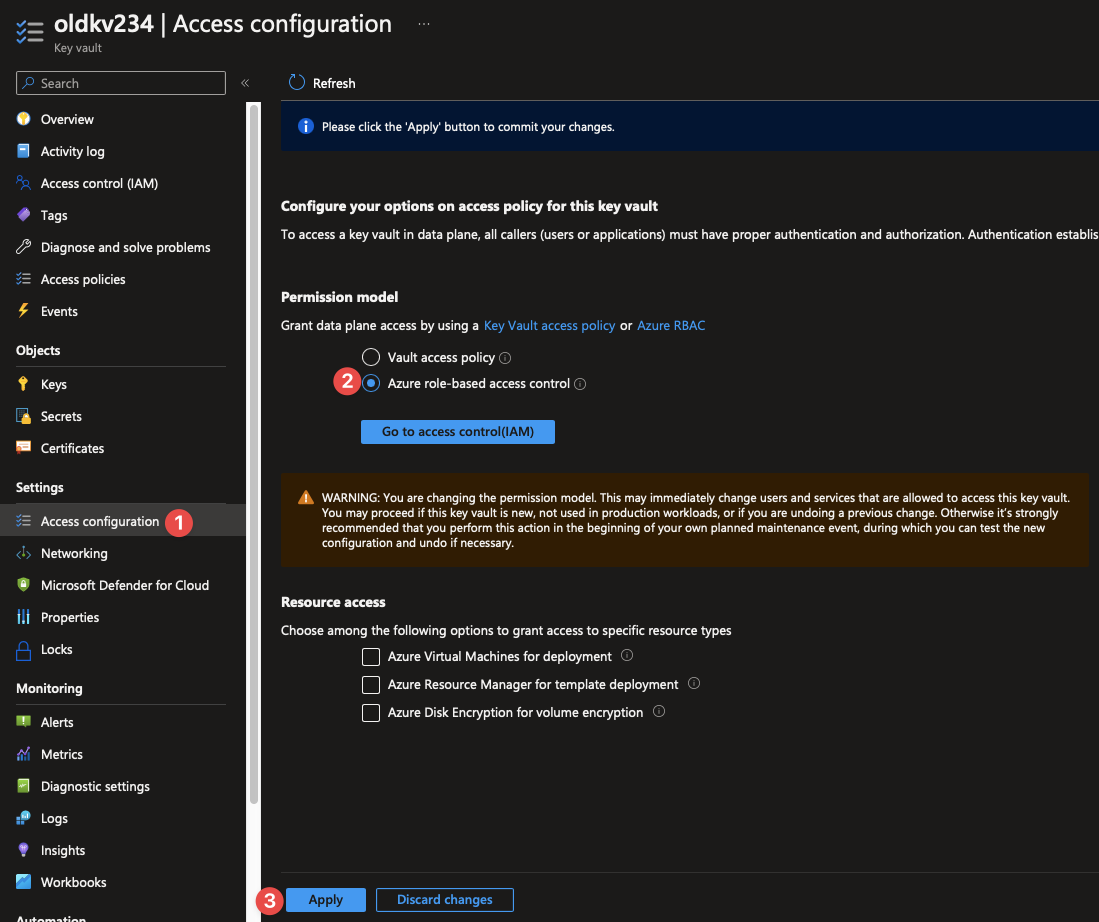 ⚠️  Warning
Make sure you have the necessary role assignments in place before switching to from access policies to RBAC or things will lose access to your Key Vault. There's a big warning about this on the page when you go to make the change as well.

If setting up a new Key Vault we just need to make sure we choose Allow role-based access control at the access policy stage of the wizard. If using the Azure CLI set the
--enable-rbac-authorization flag to true.

We’re going to focus on using the built-in roles in this post, but if those aren’t suitable for your needs you can always create a custom role with only the actions you need and apply it in the same way.

There are several built-in roles for working with RBAC for Azure but we’ll be working with the Key Vault Reader and Key Vault Secrets Officer roles. They’re highlighted in the list below. 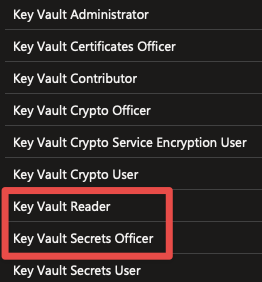 The Key Vault Reader role is described in the portal as:
“Read metadata of key vaults and its certificates, keys, and secrets. Cannot read sensitive values such as secret contents or key material.”

And the Key Vault Secrets Officer as:
“Perform any action on the secrets of a key vault, except maange permissions.”

You can find the detailed permissions each role grants in the Azure Portal or using PowerShell or the Azure CLI. More on how to do that can be found here.

With that in place we can now apply the Key Vault Secrets Officer for our identity at the scope of each secret we want that identity to be able to read the value of. To apply the role at the scope of a given secret, open that secret up in the Azure portal and on the left-hand side there will be an Access control (IAM) menu item, the same as there would be for the Key Vault itself and other Azure resource. You can then apply the Key Vault Secrets Officer role at the scope of the secret (which the portal will refer to as “this resource” in this context) in the exact same way you would apply roles in any other part of Azure.

You can also do this with the Azure CLI like so:

Our identity can now only use the secrets that we have granted it access to with the Key Vault Secrets Officer role. It can see the other secrets exist, but cannot read the value of those secrets.

Taking the new service for a test drive.

July 26, 2021 · 5 min read
© 2022 Lachlan Wright | Opinions expressed are my own and may not reflect those of my employer, clients or colleagues except where they are explicitly quoted.