Navigate back to the homepage

The announcement of Azure Virtual Network Manager (AVNM) is just one of the many exciting announcements from Microsoft Ignite 2021. It’s a new service that allows you to centrally manage your virtual networks, topologies and security rules globally. Some of the key features include:

The management of network topologies means you can specify whether you want a hub and spoke or mesh topology. The network manager will configure it for you by setting up all the peerings between any VNet within the network group (more on network groups later).

ℹ  Tip
If you choose a hub and spoke model your hub VNet will need a VNet gateway in advance if you want traffic to route between spokes. Just something to be aware of. 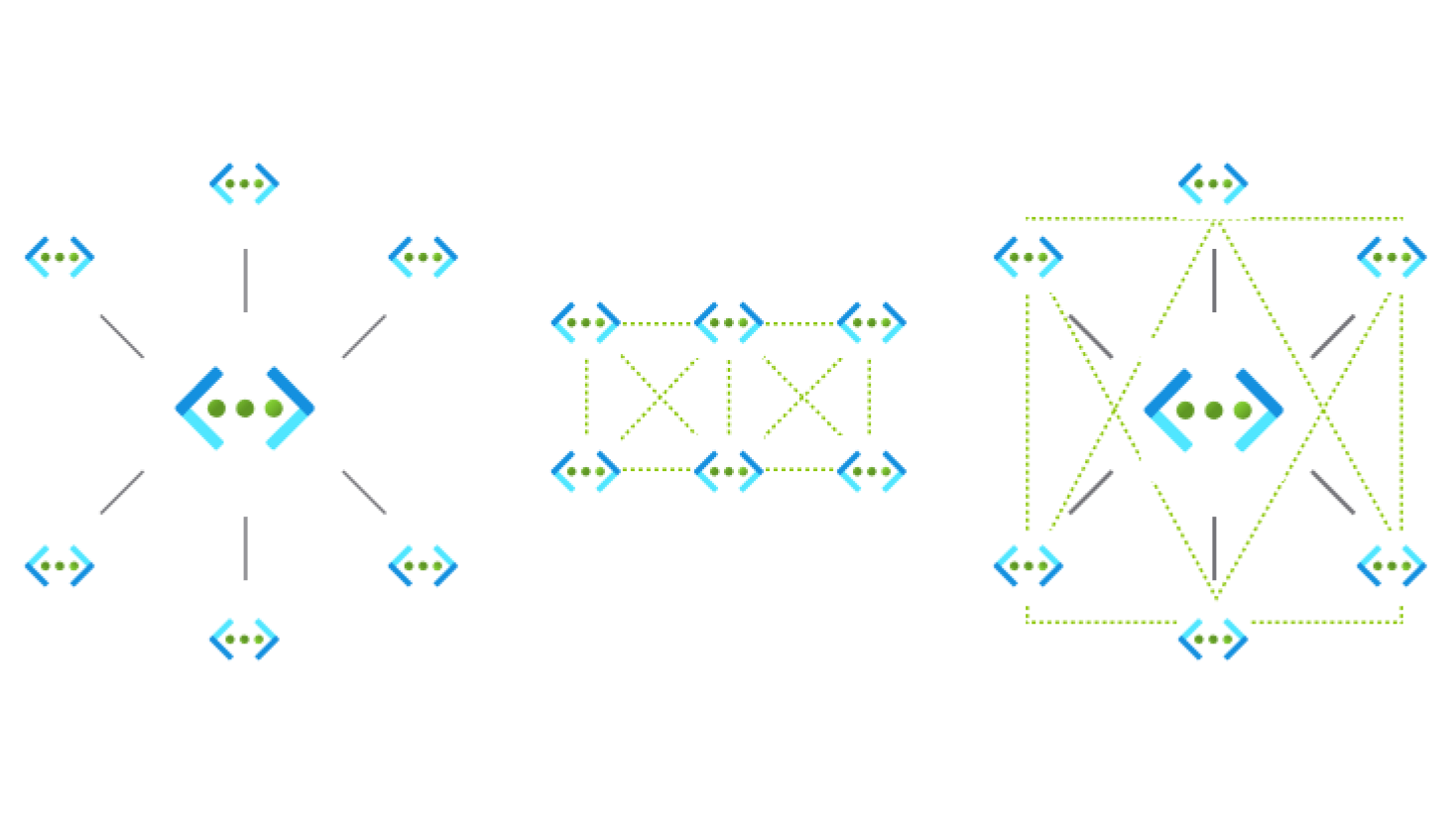 Configuration of security rules allows you to create sets of security rules (precisely the same format as NSG rules) and apply them at a VNet level. This means they take precedence over all other NSG rules! This is a pretty awesome feature that will be very useful for platform teams managing cloud infrastructure.

Finally, AVNM uses this concept of network groups (not to be confused with network security groups), which are just a collection of VNets. What’s cool about them is that they can be dynamic, meaning VNets can automatically become part of a VNet group just by having certain properties such as tags, subscription or resource group. Not having to endure the additional step of adding a new VNet to the network group makes a big difference to the service’s ease of use.

Given AVNM is a preview service there is limited support for infrastructure-as-code, so I decided to give Bicep a go here given it has near day-zero support for most new services and features. I deployed a hub VNet, some spokes and the network manager resources to try out the AVNM features. If you’re interested you can get the code here.

First things first, what’s it like to deploy? Super easy. There isn’t much to configure to get the AVNM resource deployed. You’ll need to do a bit more work to make it worthwhile, but deploying the resource can be done easily with only a handful of properties to configure. All we need to set is the features we want to enable and the scopes that the network manager should access. In testing, I turned on both features (how could I resist) and set the scope at a subscription level. The process via the portal is a breeze, and in Bicep, it looks like this:

The two items under the networkManagerScopeAccesses section are the features we want to enable. Connectivity is for configuring network topologies, and SecurityAdmin is for setting security rules.

ℹ  Tip
You can find the Bicep and ARM specifications for AVNM here. If you have the Bicep VS Code extension you will also have autocomplete and IntelliSense.

Once you have a network manager deployed, the next thing to configure is a network group. This is how you select which VNets configurations are applied to. That selection can be dynamic or static. Dynamic means that any VNet with a certain property (e.g. a tag) is added to the group. Static membership means a VNet has been explicitly added to the group. The cool thing about network groups is that they can span subscriptions and regions, making it much easier to apply a configuration to all desired VNets. 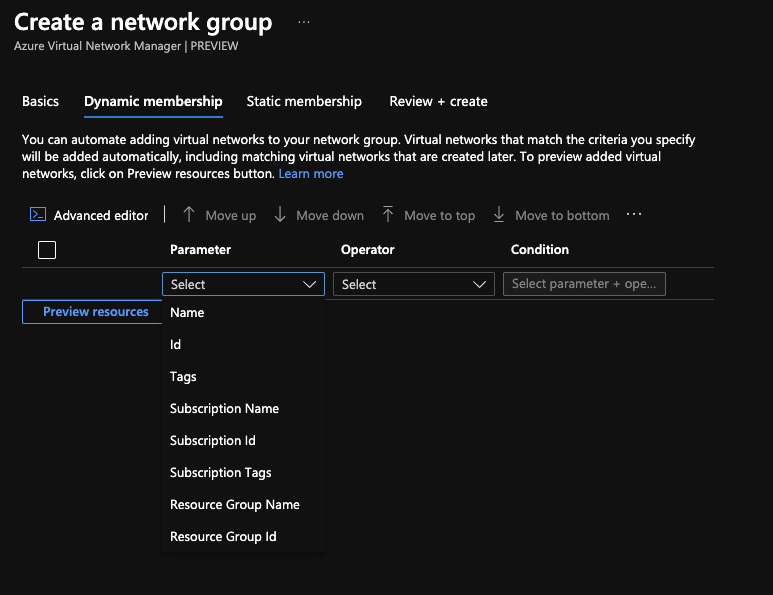 Remember that your hub VNet must have a VNet gateway if it is going to act as a gateway, otherwise the peering will fail. If you’re using the demo Bicep from above it’s included.

I haven’t tried deploying a mesh network with AVNM, so if you give it a go, I’d love to hear about your experience. You can reach me using the icons at the bottom of the page.

ℹ  Tip
Microsoft have a guide to deploying a mesh network with AVNM using either Powershell or the Portal.

Security admin configurations allow us to specify network rules that apply to all of the VNets within a network group and take precedence over any rules defined at an NSG level within those VNets. This is pretty powerful and provides a way for platform and network teams a way to efficiently enforce policy across their networks.

Creating one is pretty straightforward, albeit a little nested when doing this in the portal. You start by creating a security admin configuration, then a rule set, then a rule. The new rule blade is very similar to the new rule blade in NSGs, so you’ll be in familiar territory at that point.

The Bicep sample below is pulled from the demo code where it’s nested under the network manager resource itself hence the short type names.

I wasn’t able to find a way to create the deployments with Bicep; I could only create them in the portal or using PowerShell. However, the service is still in preview, so I hope to see Bicep support when AVNM becomes generally available.

I was most curious about this part; what happens when I deploy a new VNet into a region where I have also deployed some AVNM configurations. I was very keen to see if the configuration took effect automatically without any human intervention and how long it took for this to happen.

So the good news is, it definitely works automatically. I created a new VNet with the tag that should mean it is found by the dynamic criteria of the network group, and that worked perfectly. As for how long the process takes, it took roughly 10 minutes - not bad. I also didn’t have to lift a finger for the peering to be implemented other than making sure the VNet was tagged correctly when I created it.

With AVNM being a new service still in preview, there is bound to be a snag somewhere. For me, this was when I wanted to destroy all my resources from testing. I found that the resource group containing the VNet manager wasn’t deleting, but I also wasn’t getting any error messages. Before deleting the VNet manager you’ll need to make sure:

After that I was able to destroy the VNet manager and its resource group without trouble. Basically, make sure your VNet manager doesn’t have any child resources before you try to delete it.

To summarise, Azure Virtual Network Manager is a handy piece of kit for platform teams. It’s one that I can see being adopted to aid in the management of complex enterprise environments. Whether it’s right for your use case will depend on the maturity of your infrastructure as code and governance processes.

Not too many bugs or issues to report here other than the destroy issues I mentioned above. It would be awesome to see the service able to apply routes that take precedence in much the same fashion as security rules. The service is still in preview, so there is still plenty of time for improvements to be made before it becomes generally available.

If you have any thoughts or questions on AVNM please reach out using the icons at the very bottom of the page, I’d love to hear from you!

You never want to need it, but you'll be grateful for it when you do.

June 8, 2021 · 6 min read
© 2021 Lachlan Wright | Opinions expressed are my own and may not reflect those of my employer, clients or colleagues except where they are explicitly quoted.